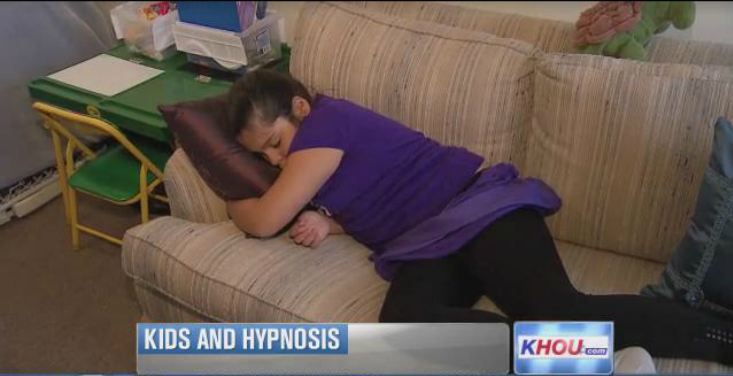 Some parents say it s made all the difference with their children, and for them seeing results is believing. The treatment involves relaxing music, soothing surroundings, and soft spoken words. It is intended to be a peaceful place conducive to healthy hypnosis. “A lot of people think of hypnosis as staged hypnosis because that’s what they’ve seen on TV or they’ve gone to a show, says Esmerelda Gonzalez. We have to ensure them that we’re not going to make them quack like a duck and that you know — and we have ethics.”

Little Julissa’s mom says math was a difficult area for her daughter not because she didn’t know how to do it but just because she didn’t have faith in herself. Hypnosis has helped, however. The treatments have also helped kids with problems like nail biting. For other parents, however, if anything it takes the pressure off and allows their kids to perform well in school with a little less anxiety.

Cynthia has worked with kids from five years old to high school. If you’re in the DC area, or in the Mid-Atlantic, we can help you.

Parents of children that have come to Cynthia see incredible progress in testing, overcoming social anxiety, sleeping patterns and general well-being. Anna and Michelle are two moms that have great things to say.

Sleep Disorder – Michelle’s Con Trace Can Sleep! – 10 years of a sleep disorder Michele brought her son Trace to see Cynthia. One session, about an hour, has given Trace, and the family, restful nights sleep for a year and counting!

Test Anxiety – Test Scores Improved!– Anna brought in her kids to work with Cynthia in hypnosis to help them with tests, and then she got some hypnosis as well!

If you have a child who is having any issue with school, sports, anxiety, sleep, motivation, or just needs a turbo charge for success…