Did You Know You Have A Mirror In Your Brain? - National Hypnosis 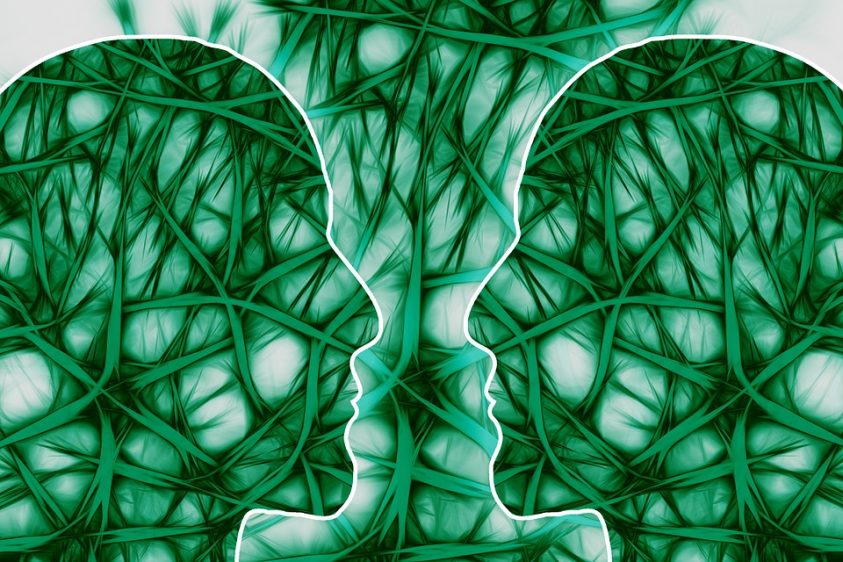 Neuro-Linguistic Programming is a technique that allows one to understand how their feelings, thoughts, and behaviors affect their life.

To make it simple, let’s break down the word itself: Neuro – refers to any type of smell, taste, feeling, sound, or image we take in throughout our life, Linguistic – refers to the meaning and words we assign to these sensory experiences, and Programming- refers to our behavior that results from these assigned meanings.

The main way practitioners use NLP is through “modeling” which is a process of choosing a success model, performing the success model in a trance state, and then utilizing this performance in real-life.

Researchers have found that NLP can cause changes in your brain through “mirror neurons”, and here’s how:

Mirror neurons allow you “to run a VR (virtual reality) simulation of the corresponding movements in your own brain”Vilayanur Ramachandran, Ph.D

1. Your Mind Is a Virtual Reality Simulator: Humans learn by imitation and mirror neurons allow you “to run a VR (virtual reality) simulation of the corresponding movements in your own brain” according to Vilayanur Ramachandran, Ph.D. This means that NLP enhances and uses a skill that you already unconsciously use every day.

2.  All You Have to Do is Watch: Mirror neurons have the same response when performing an action and when watching someone else do the same action. So, by visualizing and/or viewing a skill you want to develop you are igniting the same pathways in the brain that would activate when you’re doing it!

3. Emotions Are Healthy & Creative: Mirror neurons are involved in both emotions and actions. They “may be triggered both when experiencing a particular emotion and when observing someone else with that emotion” according to the European Science Foundation. Therefore, visualizing an emotional state through NLP could change our feelings towards a situation or ability.

4. NLP Provides Clear Goals: Mirror neurons don’t react to purposeless actions. They are goal-oriented and “seem specially tuned to respond to actions with clear goals – whether those actions are perceived through sight, sound, or any other sensory pathway” according to Ben Thomas, a researcher on the brain and consciousness. The NLP success model always has a clear goal in mind allowing for major brain activation.

“If mirror neurons help us understand the act of a basketball player making a jump shot… perhaps, if we don’t have a basketball within reach, they run simulations of behaviors that might allow us to get the ball – calling for a pass or grabbing a rebound”Researchers at the University of Tubingen in Germany

5. Success Becomes Automatic: Researchers at the University of Tubingen in Germany proposed that mirror neurons might “help us choose behaviors of our own. If mirror neurons help us understand the act of a basketball player making a jump shot by simulating neural activity as if we were making the jump shot, perhaps, if we don’t have a basketball within reach, they run simulations of behaviors that might allow us to get the ball – calling for a pass or grabbing a rebound” as stated by Daniel Lametti. This would mean that by visualizing one’s goal through NLP your brain would then take this visualization and use it to make choices that would help make it your reality.

The craving for excellence in what one’s passionate about, be it in the arts, business, or anything else, is innate. Everyone also has someone they look up to or aspire to be like in life. With the ability of your brain’s mirror neurons and the effectiveness of NLP to activate those mirror neurons, these aspirations are within reach for every single one of us. Start utilizing NLP and watch your abilities reach the levels you’ve desired!

-European Science Foundation. “How Mirror Neurons Allow Us To Learn And Socialize By Going Through The Motions In The Head.” ScienceDaily. ScienceDaily, 21 December 2008, www.sciencedaily.com/releases/2008/12/081219073047.htm.