DISCLAIMER: Results may vary from person to person. Hypnotherapy is not a replacement for medical care. All of your care should be supervised by your doctor.

UPDATE 02/2019
More great news from Kristen as she heals herself. Listen to what she has to say:

UPDATE  12/2016
Kristen continues to see improvement. Long since shedding her symptoms, Kristen’s vision is 20/20 and she is leading a completely normal life including regular vigorous exercise, a change from 2 years ago where she was unable to even “jump and inch off the ground.”  Kristen is compliant with her medications and is under the supervision of her doctor. 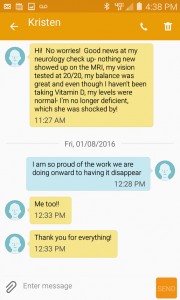 LOUDOUN COUNTY, VIRGINIA — Kristen was 24 when she noticed her vision was a little blurry. She didn’t think it was a big deal, but swung by the optometrist across from her office for a quick check-up just in case.

Kristen didn’t need glasses. The doctor told her she was likely suffering optic neuritis – widely considered the first sign of multiple sclerosis (MS), a nerve disorder with no known cause or cure.

Affecting an estimated 350,000 people in the U.S., MS can lead to blindness, loss of hearing and even paralysis. There are medications that slow the progression of the disease but they far from guarantee a good quality of life.  Enter Mind Body Medicine (MBM) therapies like yoga, acupuncture and hypnosis. Widely used by the American public, NIH funded studies have begun to reveal MBM therapies are effective in improving quality of life, anxiety, and pain intensity for a variety of conditions. There is preliminary evidence to suggest these techniques may affect coronary artery disease and cancer.

Kristen leads a healthy lifestyle and until she connected with Cynthia Chauvin, a family friend, her approach had been traditional. A certified hypnotherapist in Northern Virginia, Chauvin had been using her techniques for over ten years to help patients battle stress or break unwanted behaviors. She’d wanted to explore other medical applications for hypnosis, ones with measurable physical results.

“I’ve been interested in seeing if hypnosis could be used to help someone literally heal themselves,” explained Chauvin. “But it needed to be the right person.”

It had to be someone who truly believed the technique could work. After a couple initial conversations, Chauvin decided Kristen was the perfect candidate for hypnosis.

Kristen has a form of MS called “relapsing remitting,” as opposed to the more serious “progressive.” She can have an attack and then go back to normal. Doctors have told her that she will likely reach progressive, where attacks lead to lasting damage and symptoms worsen. Wanting to postpone that day for as long as possible Kristen was open to anything.

Hypnosis comes in two flavors. There’s the stage variety, where hypnotist showmen use the power of trance to “suggest” behaviors in participants for comedic effect.

“Sing in Martian, believe that a belt is a snake or fall in love with a complete stranger,” said Chauvin. “It’s all in good fun. But it’s also a clue as to what’s possible.”

In hypnotherapy, the practitioner also uses the power of trance to suggest behaviors in his or her clients. But instead of getting them to think they are talking to their imaginary friend, the, hypnotherapist may help a person un-learn a smoking habit, for example. Chauvin calls her technique “trance-based learning.”

Medicine has known about the “relaxation response” and the “placebo effect” for many years. But Chauvin believes something else is going on and she wondered if hypnosis could literally help someone heal themselves.

Last June, Kristen settled into her first 90-minute session. At that point, Kristen’s symptoms included numbness and a consistent and a sandpapery feel in her hands. In six sessions, over a six week period, Chauvin would put Kristen in a trance, and then directly and indirectly told her body to repair the connections that MS was breaking down.

“We’re visualizing building bridges and getting the body and nerves talking again, something that multiple sclerosis literally interferes with,” explained Chauvin. “I don’t think this is just about changing her body to a relaxed state; I suspect we’re actually re-wiring her system on some level.”

And there was never any discussion of MS.

“I don’t talk about the malady at all,” said Chauvin. “The entire session is about connectivity, working with Kristen’s deepest innate abilities and letting her body do the rest.”  Cynthia adds, “I never use the words healing, it infers disease. I only refer to the body establishing a healthy balance on a cellular level.”

Cynthia describes the sessions plainly. “Each session is pretty simple. I put her into a deep relaxed state and using a basic structure I have developed, I improvise the session from that point.”

Once a point of derision within the medical establishment, mind-body medicine techniques such as yoga, meditation, tai chi and hypnosis are now recognized as having real positive effects on certain conditions. Large medical schools including Harvard University and Georgetown University have launched programs on the mind-body connection and the National Institutes for Health is actively funding complementary medicine studies through the National Center for Complementary and Integrative Health.

“Since its establishment 16 years ago, the center has funded thousands of important research projects. Without this work, the American public would lack vital information on the safety and effectiveness of many practices and products that are widely used and readily available,” said NIH Director Francis S. Collins, M.D., Ph.D.”

Cynthia’s experiment was not an actual scientific experiment. It was just one young woman. But after two sessions, Kristen said the rough feel of her hands had vanished. And an MRI done 12 weeks later found that the lesions in her brain had gone from inflamed to stable. One of them was completely gone.

It could be an anomaly, but Kristen doesn’t think so and while Kristen leads an active lifestyle and does yoga, she attributes her progress to her work with Chauvin. 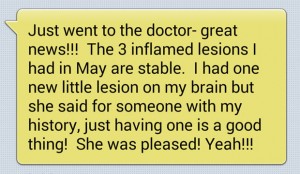 Good news from the doctor

Chauvin is now starting to use the techniques on other clients with chronic issues, and said she’s seeing the same anecdotal progress.

There is no hard proof; that would require extensive and expensive double-blind trials with many participants. But for Kristen, whose symptoms went from daily to non-existent it’s proof enough.

“I would recommend Cynthia for any physical ailment you’re trying to move past,” said Kristen. “Especially if you’ve been told you have something chronic and incurable. Before you get stuck in that mindset, I would definitely recommend Cynthia’s work with hypnotherapy because I think it will make a big difference.”